Kazan, who directed the 1954 landmark film On the Waterfront that I recommended in my last roundup, made one more great film during his 15-year assault on Hollywood.  Most of his movies were shot on location in New York City and Hoboken, New Jersey, and they all dealt in one way or another with union corruption and/or mass media manipulation.

A Face in the Crowd examines the link between the popularity of TV stars and their pathways to political power.

This incredibly prescient film (which was a major influence on Sidney Lumet’s 1976 (Network), introduces us to a modern version of Mary Shelley’s Dr. Frankenstein in the guise of Marcia (making her a woman is a nice homage), a young local rural radio reporter, played beautifully by the always graceful and luminous Patricia Neal, who wants to do a series for her boss’ local morning show about “real people.” 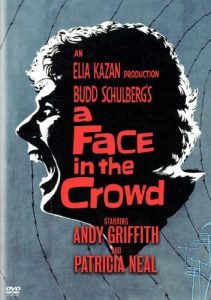 In the town jail, she discovers a hungover itinerant who proves both completely charming and totally fake. She records him for the air, audiences love him, and so begins the rise of “Lonesome” Rhodes, played by Andy Griffith, in a performance so believable it ended his film career, as audiences thought he really was the horrible “Lonesome” Rhodes.

His media rise is swift, dangerous, and nasty. Along the way, he seduces beautiful women and teenage girls indiscriminately, aligns himself with sponsors’ products (think of all the junk medicine in TV commercials today), and then takes the leap (or the dive) into the world of political image-making. This leads to one of the most powerful climaxes ever filmed. Marcia, with great difficulty but absolute determination, uses the medium that propelled Rhodes to success, the airwaves to destroy the monster she helped create.

The film was not a hit at the time of its release, due as much to Kazan’s being out of fashion because of his troubles with the House Un-American Activities earlier in the decade (Brando’s testimony against Lee J. Cobb in Waterfront was Kazan’s attempt to justify his testifying before the Committee and naming name; his career never fully recovered). 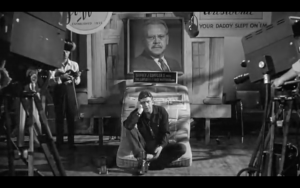 A Face in the Crowd also attacked the most influential media personalities of the day, including Arthur Godfrey and Walter Winchell, both long forgotten, and unknown outside of America, but in their time all-powerful TV, radio  and print personalities.  The film also touches on the fascinating legacy of Will Rogers, an American political humorist of the ‘30s whom, it was said, had an eye on the White House, before his untimely death in a private plane crash.

A Face in the Crowd is like no other American film of its time.

A financial and critical failure when it was released, it is now acknowledged by the AFI (American Film Institute) as a true classic. The idea that a TV host becoming a political force  seemed so unbelievable at the time. Welcome to the future, as I’m sure you’ve heard…

More content from Marc Eliot at the UFM Film School:

Stay tuned for next week’s recommendation!