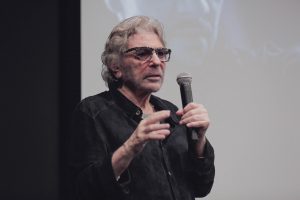 Hitchcock is a director whose films we never tire of seeing. They are highly entertaining and easy to take, entertaining because they are easy to take. On their shimmering face, simple genre suspense flicks; beneath of even the most accessible Hitchcock lurks the deeper workings of the human psyche. Hitchcock’s films are mediations on the Christian-Judeo-Freudian-based complexities of the pursuit of love and the blurred border between the personification of good and evil. Brought up as a Calvinist, Hitch’s world is one of universal guilt, where everyone’s morally sound “good” side in danger of being overtaken by its “evil dark other,” and it is that struggle that shapes so much of the great director’s work.

Hitchcock remains one of the true blue (and relatively few) Hollywood directors ever to emerge from and rise above the bottom-dollar obsessions of the so-called dream factory to approach the level of authentic cinematic art. His films may age but they don’t date”. – Marc Eliot

They remain timeless because of how they illustrate the clash between the moral high ground and the depraved lower depths through characters at war with their spiritual selves over what they should do (repression) and what they wish they could do (fantasy). To watch a Hitchcock film is to take a deep dip into the cinema’s emotional amusement park, the most popular rides being the Ferris wheels of contemporary romance, the fear of commitment, the psychology of ambivalence, the torment of pleasure and the pleasure of torment.

It was once said that Hitchcock didn’t make fifty-two films; he made one film fifty-two times”. – Marc Eliot

If John Ford was the master of sentimentality (How Green was my Valley), Chaplin the wit of the idealized underclass (Modern Times), Howard Hawks the action-packed activator of proto-feminist self-awareness (Bringing Up Baby), and Welles the avatar of expressionist ambivalence, Hitchcock was the master architect of the eternal moral struggle within, between good and evil. What guarantees his place in the Pantheon is that it is possible to watch his expressive thematic growth and development through the progression of his films (if, indeed, there is a difference between expression and theme, something auteurists have been debated forever. For what it’s worth, I fall on the side of no difference).

Ultimately, to have the fullest understanding of Hitchcock it is necessary to see all of his films, preferably in the order he made them. In this, our second cycle, we will see four of his films, earliest first, less than 10% of his total body of work, as a sampling of his artistic progress”. – Marc Eliot

Industrial Hollywood, along with general film critics throughout the thirties, forties, fifties into the early sixties dismissed Hitchcock’s films (and Ford’s, Chaplin’s Hawks’, and Welles’) as mere genre films, nothing more than “B” movies that were inferior to the pseudo-sophistication of “European cinema” and barely deserved even the condescending reviews they received. Auteurism helped elevate these great filmmakers to their proper place in the Pantheon. Through the years, as people (critics and historians too) have been able to see more and more of Hitchcock’s films via revival houses, cable, and other viewing outlets, including UFM, his reputation has steadily grown. Today he is widely regarded as one of the great artists of the twentieth century.

In the next two parts of this article, we will look at five of his films, including another view of North by Northwest, Hitch’s remake of, 1942’s Saboteur.

Read next week Marc Eliot’s review on some of the most important movies from Alfred Hitchcock!